This is Dr. Cal Shipley with a review of cardiac ablation to treat ectopic atrial tachycardia.

Let’s start by taking a look at the normal electrophysiology of the heart.

The heart consists of four contracting chambers; the right and left atrium, and the right and left ventricle. The sinoatrial node is a bundle of cells located in the wall of the right atrium. The SA node starts each heartbeat by spontaneously producing an electrical impulse. The impulse travels along the cardiac conduction system, a series of nerve bundles, and spreads throughout the atria, causing them to contract. At the same time, an impulse travels to the atrioventricular node located at the junction between the right atrium and the right ventricle. This, in turn, stimulates an impulse in the atrioventricular node.

The AV node impulse travels along conduction pathways to both ventricles. The impulse spreads through the ventricles and causes them to contract.

This cycle repeats about 60 to 100 times per minute. Normal impulse generation, conduction and heartbeat are known as normal sinus rhythm (NSR).

In our review of cardiac electrophysiology, we noted that normal sinus rhythm starts with the sinoatrial node. In ectopic atrial tachycardia, an abnormal cluster of cells located in either the left or right atrium generates spontaneous electrical impulses independently of the SA node. These abnormal impulses are termed ectopic because they are generated in a location which is outside of the normal cardiac conduction system.

Even in the presence of AV node block, ventricular rates of 120 to 150 beats per minute are not uncommon during bursts of ectopic activity. Ectopic atrial tachycardia is one form of supraventricular tachycardia (SVT), that is, tachycardia originating because of electrical abnormalities outside of the ventricles.

In the short term, EAT can precipitate heart failure in individuals with pre-existing cardiac disease. For example, a history of myocardial infarction.

In the long term, the tachycardia associated with recurrent or persistent bouts of EAT can result in cardiomyopathy, with weakening and enlargement of the atria and ventricles.

Now that we have a better understanding of what ectopic atrial tachycardia is, how it occurs, and some of the dangers associated with it, let’s turn to treatment with cardiac ablation.

I’m going to use the same example of a cluster of cells generating impulses in the right atrium, but these clusters may occur in either atrium, and in some cases, multiple clusters may be present in either or both atria.

To begin the procedure, a sheath is inserted through either the right or left femoral vein, and then up through the inferior vena cava and into the right atrium. The sheath is a relatively rigid tube which provides a good anchor for the more flexible ablation catheter.

An ablation catheter is then inserted through the sheath. In addition to performing ablation, the catheter is also capable of mapping the ectopic cell clusters so that the electrophysiologist can accurately determine their location prior to, and during, the ablation procedure.

Cardiac ablation requires tremendous skill and perseverance on the part of the electrophysiologist. Not the least of the challenges is the fact that the catheter must be accurately manipulated while the heart is beating. In some cases, the procedure may require several hours to complete.

Once the ectopic cell cluster has been located, radio frequency pulses are emitted, which heat the tissue and ablate the cells.

The success of the ablation procedure is based on re-establishment of normal sinus rhythm and the elimination of future recurrences of EAT. 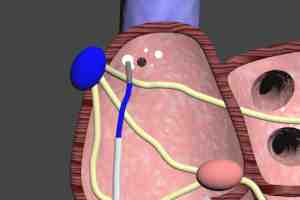