This is Dr. Cal Shipley with a review of laparoscopic appendectomy.

The first step in the procedure is to insert a thin needle-like cannula into the abdomen in the area of the umbilicus. Viewing the abdomen from the left side in a cross-sectional view, we can see the cannula inserted into the peritoneal space. In a process known as insufflation, carbon dioxide gas is passed through the cannula into the peritoneal space. Insufflation increases the workspace within the abdominal cavity for the surgeon to manipulate instruments during the procedure.

Once insufflation of the abdomen has been accomplished, the surgical incisions are made.

In contrast to open appendectomy, where a 3 to 5-inch incision is made directly over the infected appendix, laparoscopic appendectomy relies on several small quarter to half-inch incisions, all of them made away from the area of appendiceal infection. These small incisions are known as ports.

Trocars consisting of cylindrical metal tubes with collars are inserted through the ports. Although there are several variations, the setup of ports and trocars I have depicted here is fairly typical, with placement in the periumbilical region, the left lower quadrant of the abdomen, and the suprapubic area. The left lower quadrant and suprapubic ports are used for surgical instruments. One of the instrument ports may be used for a suction tool to remove blood and excess fluid from the operative field as needed.

Location and Removal of the Appendix

In this example, about 75% of the appendix has become infected and inflamed. About 25% of the organ, including the base, is normal. Having identified and exposed the appendix, the next step is to separate the appendix from its blood supply. In order to accomplish this, it is necessary to fully expose the mesoappendix which carries the appendiceal artery and its tributaries. Typically, a blunt instrument is used to create a window or hole in the mesoappendix membrane. A Bovie electrocautery unit is then used to cut the membrane, coagulating any vessels it encounters as it moves along. Once the blood supply has been separated, the surgeon confirms the location of the appendiceal base using the junction of the three teniae coli as an anatomical landmark.

A surgical stapler is positioned over the appendecial base, and with one action, it severs the base from the cecum and also staples and seals both sides of the incision. The remaining appendiceal stump is about 5 millimeters in length. The infected appendix is now free of all attachments and may be removed. 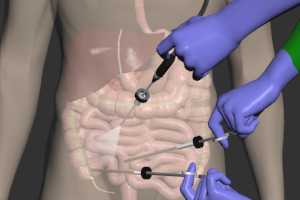